CHAPTER FOUR of  “Commie wage slave,” in which I learn to bake biscuits in the living room

Every morning at 7:30, the gym teacher at the high school next door and nine stories below would begin bellowing commands into his bull horn at the uniformed boys and girls lined up before him. About 200 of them, in identical blue-and-white outfits, did calisthenics to his barked instructions. He seemed to equate authority with volume.

He was deafening even when the sliding glass doors to the patio of my Beijing apartment were closed. Having worked a shift ending at 10:30 p.m., I resented being jolted awake so early by his racket.

I learned to fall back asleep despite the irritation he always aroused, getting accustomed much more quickly to the violently surging whoosh of water through the plumbing whenever someone upstairs flushed or showered. All the pipes were outside the walls, which greatly enhanced the sound effects.

Once up, I’d bake biscuits from scratch in the big, counter-top convection toaster oven equipping the apartment and brew Swedish-brand coffee from Ikea.

My Chinese colleagues would carry their personal bowls down the elevator and across the parking lot to the newspaper’s cafeteria, where they’d breakfast on rice porridge, fruit or steamed buns. Most also carried an empty storage container for stocking up on whatever was available. They used the company cafeteria, with its very inexpensive food, as a grocery store.

I’d slather honey or peanut butter on my biscuits. The Chinese would sprinkle seaweed or pickles on their porridge, or bite into a bun filled with red bean paste.

Most China Daily workers lived in one of the two apartment buildings inside the company’s fenced, gate-housed compound. To enter, you needed a company ID badge, which hung on a neck cord. Building staffers in the gatehouse and in the apartment offices, as well as security guards at the newspaper entrances and exits, kept an eye on everyone. Although English-speaking foreigners filled many of the apartments, none of the building staffers spoke any. This was a challenge when you needed to report a loss of hot water or a broken appliance, so it was one of many chores our employer’s foreign-worker minders handled for us.

The apartments in my building were comfortable enough. Foreign singles had one-bedrooms to themselves, with a living room, dining room, kitchen, bath and two screened patios. All were furnished with basics: bed, desk, chairs, small dining table, living room coffee table and a television with two English-language channels that got mostly snow.

Every item – wastebasket, desk lamp, cleaver – was carefully listed on an inventory signed by each resident upon arrival, and just as carefully checked when we left.

Foreigners always supplemented the meager furnishings with household goods purchased at Ikea and WuMart, the Chinese knock-off of WalMart. (I tried futilely to find anything with a WuMart label to bring home.)  I bought a sofa, floor lamp, fan, CD player/radio, a wok, a few pots, a Dutch oven, a comforter, a tabletop ironing board, a couple of plants, knives, silverware, glasses, plates and a coffee press. I looked in vain for a large serving fork and a potato masher. A large fork probably wouldn’t have made it past Chinese mail inspectors, but a friend successfully shipped me a potato masher. It got a workout at Thanksgiving, Christmas and birthdays.

While single foreigners enjoyed their privacy in these apartments, two or more Chinese employees were crammed into the same one-bedrooms. Unlike the foreigners, they also had to pay rent and utilities, and on much smaller salaries.

The closest place for groceries was a 7-11 just across the street, part of the American chain. Instead of coffee, it sold hot soy milk. It smelled inside like fish, not hot dogs. 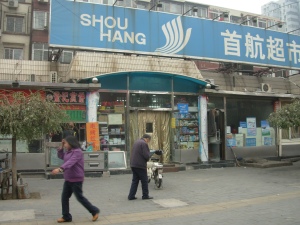 A block away was Shou Hang, a small grocery slightly bigger than a convenience store. This is where we bought Jackie Chan frozen dumplings, peanut butter, wasabi crackers and an excellent locally brewed beer called Beijing.

I bought my first Chinese chicken there, a fryer all wrapped up in plastic just like at home. I didn’t know its claws still were attached, neatly folded up underneath and tucked out of sight. They made a startling appearance after the bird had been in a pot of boiling water for a few minutes. When its legs relaxed, out sprang the feet.

A couple of typical Chinese markets several blocks away offered stalls selling produce, household items, meat, fish, grains, nuts, spices, condiments, steamed bread and buns. Also nearby was a big Japanese department store, Ito Yokado, which had a large Western-style supermarket in its basement. This was the closest place to buy a good baguette, high quality butter from Ireland or Denmark and cheese, pasta and whipping cream. For more exotic Western items, such as chocolate chips, we trekked to one of the groceries in the embassy district specializing in hard-to-find and high-priced products from home or depended on care packages from family and friends.

It was easy to recognize the Ito was a supermarket. But as with apes and humans, who share 98 percent of their DNA in common, the remaining two percent makes all the difference.

Ito had the usual departments and many of the same kinds of products. Signs over the aisles were in English as well as Chinese (or in one case, Chinglish; over the aisle with Western foodstuffs, it read, “Anticipate to Western fashions adjust.”) There were metal shopping carts and a row of checkout counters up front, piles of produce and cases of frozen foods.

But that other two percent of cultural DNA turned Ito into a whole different animal, a phenomenon Westerners experienced over and over in China. There were bathrooms, but no toilets; restaurants, but no silverware; faucets, but no drinkable tap water.

The meat department featured carcasses as well as ribs, chops, steaks, ground meat, organs and extremities such as chicken feet or pig trotters. Not everything was recognizable. Since reading labels was not an option, I mostly stuck to chicken to avoid accidentally bringing home donkey or horse. Tanks in the fish department contained live eels and turtles, while fresh squid, octopus and dozens of kinds of whole fish were spread out on ice.

Clerks staffing each department acted like carnival barkers, hollering come-ons over one another to customers. In each aisle, uniformed staffers loudly spieled the attributes of the toilet paper or pet food they were supposed to sell. A moment’s hesitation or any accidental eye contact would trigger a relentless onslaught, a cacophony of commerce.

My Beijing kitchen was barely bigger than the bathroom. It contained a small one-bowl sink, a few cabinets, about 24 inches of counter space, a cooktop with three gas burners and a rather primitive washing machine which got only cold water. The clothes dryer consisted of metal poles running along the patio ceilings, a feature of almost every apartment in Beijing. From any sidewalk, looking up at an apartment building, the most prominent feature of the balconies was clothing hung to dry. The absence of dryers probably explains why stores stocked bins of lint rollers.

There were no ovens, but many of the apartments had microwaves. Mine didn’t, so I borrowed a big tabletop convection oven from another apartment. It was too large for the little counter top areas in the kitchen. But it fit just right in a big open shelf of the credenza the TV sat on in the living room. (The TV/oven combination made for a peculiar entertainment center.) The refrigerator stood in the dining room, as there was no room for that in the kitchen, either. The counter tops came to just higher than mid-thigh; I had to bend to reach the sink when washing dishes.

Because I was much taller than almost every Chinese, my knees couldn’t always fit under the table in a restaurant. Getting in and out of taxis was hard and sitting in the little metal box of a pedicab was out of the question. I appreciated every day that whoever installed the shower head had thoughtfully mounted it almost at the ceiling.

My two-block walk to work took me by the gatehouse and past a family of scavengers with an ever-changing sidewalk inventory of used furniture and appliances. They sold me a bookcase and delivered it for four bucks.

The route took me down the street half a block to the corner with the 7-11, then a left turn and one block down a busy, willow-lined street to the first alley. China Daily’s compound, including a big garden of roses, lilacs, gingko trees, poplars and benches, took up most of this area. On many weekdays during the lunch break, one of the American workers jogged around the compound, while a young Chinese woman moved about the freight driveway practicing graceful and potentially lethal moves with a sword. Always, the smell of sewage wafted through the streets. (This wasn’t true everywhere in Beijing, but it always was present in the China Daily neighborhood.)

Restaurants lined the alley on one side: two Western-style coffee shops, a Subway, a couple of Chinese restaurants, a Japanese restaurant, a pizza place and a noodle shop.

The other side of the alley was lined with parked motorbikes and bicycles. In good weather, the noodle shop, a China Daily hangout, set out tables and chairs. During the World Cup soccer matches, it wheeled out a television for avid fans who’d cheer late into the night. At least 100 watched night after night just at this one small noodle shop.

They kept a close watch out for the local cops, called chengguan, a force of ill-trained bullies whose sole duty seemed to be enforcement of anti-sidewalk vendor codes. Rather than face confiscation of cash, destruction of merchandise and maybe a beating, vendors hurtled down the alley and scattered at the first sign of the chengguan.

The bookseller pictured above was always on the sidewalk in front of the office. His selection of books in English sometimes included astonishing selections, such as George Orwell’s “Animal Farm” and Henry Thoreau’s “Civil Disobedience.”

When he stopped showing up, we worried. Had some English-proficient official noticed the inflammatory titles? We hoped not, but we never saw him again.

One thought on “Home, sweet home”