Gun extremists insist that liberty depends on unlimited access to guns. In their view, firearms protect their freedom of expression to  threaten a lifelong gun owner with death, but not his right to disagree with them. 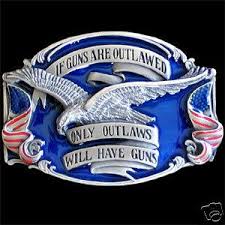 Gun journalist Dick Metcalf, 67, suggested in his  column at Guns & Ammo magazine that requiring 16 hours of firearms training for gun purchasers was not an unreasonable infringement of their Second Amendment rights.  Every constitutional right, he wrote, is regulated in some way. He used the old example of that well-known First Amendment limit on free speech that prohibits people from falsely yelling “Fire” in a crowded theater. More recent versions of this argument would be joking about blowing up an airplane while going through security screening, or posting idle musings on Facebook about which fellow students you might like to shoot.

Unfortunately for Metcalf, his editors fired him after caving to threats about cancelled subscriptions from outraged readers and loss of advertising revenue from gun makers.

Democracy requires consensus, a meeting on middle ground achieved through compromise on both sides. What gun nuts endorse, with their hysteria, distortion and willful refusal to acknowledge rational arguments, is armed-to-the-teeth anarchy.  Every person a law unto himself and no central authority to tell him otherwise – if that’s what they want, they might like living in Afghanistan.