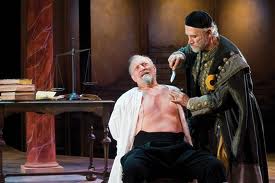 That’s the clue to 32 Down (three letters) in a crossword puzzle published yesterday and composed by Victor Barocas, a professor in the biomedical engineering department at the University of Minnesota. The answer is “Jew.” Shylock was a money lender in the Shakespeare play “Merchant of Venice,” who demands a pound of flesh from the guarantor of a loan who can’t pay.

Today, the Chicago Tribune’s customary publication of the answers to the previous day’s puzzle included an intriguing three-letter gap of blank spaces and this explanation: “…the answer to 32 Down has been blocked because it would make the combination of clue and solution an offensive stereotype.”

I, for one, was clueless about Shylock, having never read “Merchant of Venice.” Thus, I entirely missed not only the answer, but the offensive-stereotype link until the Trib’s note mentioned it. I had to Google “Shylock” to find out why the three blanked-out letters J-E-W (whose absences made the answers Sajak, oneG and byweight look like grins missing teeth) might offend anyone.

So the Trib’s note provided an educational opportunity about stereotypes and prejudice, but I wonder if blanking out the word “Jew” undermined it. By refusing to openly identify words used offensively, don’t we send a mixed message, signaling hesitation about confronting the mistaken beliefs which give those slurs power?

That hesitation can be taken as ambivalence, which signals we’re not sure of our ground.

If Paula Deen had said “N-word” instead of “nigger,” would she have sounded less prejudiced?

One thought on “Did Jew really say that?”