CHAPTER ONE, in which a jobless American journalist

goes to work for a Chinese newspaper in Beijing 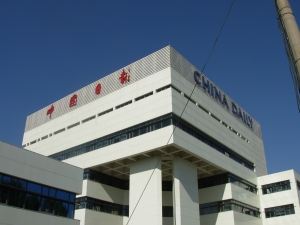 Like millions of other Americans, by the summer of 2009 I faced financial ruin.

My biggest mistake was having chosen 30 years ago to embark on a career as a newspaper reporter. I was probably in the last graduate class of journalism students anywhere who used typewriters.

The first computer I saw was at my first newspaper job in 1981. Who foresaw those big, clunky boxes morphing into palm-sized devices, turning printed newspapers into 21st-century buggy whips?

My second big mistake was to leave a newspaper job at the age of 49 thinking I could get another one. I hadn’t realized that my 50th birthday would be like a brick wall between me and a newsroom.

Finally, the whole economy tanked, driving the last nail into the coffin of my career.

So there I was, with boxes full of front-page articles and magazine cover stories, a few nice awards, a master’s degree for the resume and not a chance in hell of finding a full-time job with a livable salary in my chosen profession. The low-wage, part-time jobs I’d scraped up had just delayed the inevitable while depleting my savings. A few thousand dollars stood between me and foreclosure, then homelessness or moving in with a relative.

My long-time buddy Renee, a fellow survivor of news organizations, joked that we would live out of neighboring shopping carts under a bridge in San Diego, where at least the weather was good. That was funny when it seemed unlikely.

In May 2009, I got a card from her that showed two women sitting on a couch, grinning: “A good friend will bail you out of jail. A great friend is sitting beside you saying, ‘Wow, that was fun!’”

Inside, she wrote that she was off to Beijing for a job at the English-language newspaper, China Daily. After she got there, she pelted me with emails describing the wonders of the Chinese capital: the Forbidden City, Tiananmen Square, the Silk Street Market, the neighborhood noodle shop where we could feast on fresh, hand-pulled noodles with beef and a locally brewed beer for $1.50. Why don’t you apply, she wrote, I’ll give you a reference. They’re hiring.

Renee had been there two months, but it was enough when combined with my resume to snag a job offer.

It came in an email from Mr. Pan, who ran the office that babysits China Daily’s English-speaking “foreign experts” and shepherds them through encounters with officialdom, like registering your address with the police. He offered a one-year job correcting the English of its Chinese reporters and editors at a salary of roughly $33,000 (at the then-current exchange rate), plus a rent-free, utilities-paid one-bedroom apartment, health insurance, 20 days off for Chinese festivals and plane tickets for one trip to Beijing and one back home a year later.

By then, I hadn’t had a full-time job or health insurance for seven years.

So saying yes to an offer that would keep me going financially for a while longer, plus let me experience China with one of my closest friends and on someone else’s dime, was a no-brainer. Only later, after eagerly accepting the offer, did I wonder whether working for a dictatorship on one of its propaganda organs might be hard.

But that niggling concern got shoved aside while I concentrated on the details of preparing for a year in China. These included getting five vaccinations, obtaining a year’s supply of a prescription medicine, buying an enormous suitcase and pressing relatives into duty as caretakers for my pets, my house and my small pet-sitting business.   http://datelinebeijing.wordpress.com/2010/12/21/what-to-do-before-leaving-for-beijing/

As I quickly learned once in Beijing, there is no such thing as a free press in China, or freedom of expression. China Daily articles tended to range from public relations hype to outright propaganda.

Taiwan, for example, is not called a country. It’s an “autonomous region.”

The Dalai Lama is a “terrorist,” and Tibet was “liberated.”

Advertising is routinely written up as news, and it’s standard practice to sell or trade space on so-called news pages for articles that here would be labeled as advertising.

The continual distortion doesn’t always sink to the level of propaganda, but it does leave the paper resembling a chamber-of-commerce publication.

Mercifully, the jobs of foreign reporters and editors typically are limited to the point that they do no significant reporting or editing. Chinese reporters (with some brave exceptions) are little more than stenographers, dutifully recording the story line as presented by officials and businesses.

Why, you may be asking, would any self-respecting foreign journalist participate in this?

We needed jobs, and needed them badly enough to go all the way to China for them. Although the younger expatriates generally were just enjoying the adventure, the older ones were trying to hang onto houses, or help their kids through college or recover retirement savings lost to suddenly worthless investments and disappearing pensions.

When I got home a year later, I couldn’t stop talking about China. For months, the most mundane events – shopping for groceries, going to a movie, eating out, waiting in line – prompted anecdotes about how differently people do those things in China.

What most surprised everyone was hearing what the Chinese believed about us. People here don’t realize how little the Chinese know about us (and how little we know about them) until they hear some of these anecdotes. One described an after-work chat over beers that left my expat friends and our young Chinese co-workers slack-jawed with amazement about each other’s countries.

Reports that millions of Chinese visitors to the 2010 Shanghai Expo were mesmerized by its water fountains amused and puzzled the expats. Our Chinese co-workers didn’t understand why the fascination with water fountains wasn’t obvious to us. Most Chinese (and all expats) drank only bottled water because even after boiling, tap water throughout China contains too much sediment to be swallowed. Drinking the equivalent of tap water without boiling it first was a novel experience for Chinese, they said.

We wouldn’t have thought of that, one of us answered, since we’re don’t have to do that at home.

Our Chinese friends looked stunned. Do you mean you drink water right out of the tap, without boiling it? Yes, we answered, in fact it’s required to have drinkable tap water for any dwelling to be considered legally habitable. They clearly wanted to believe us and just as obviously didn’t.

This was one result of severe restrictions on information about the world outside China. In combination with decades of government lies about the United States, such as telling Chinese in the 1950s that children in America were starving, even the most educated, computer-savvy urbanites have trouble telling truth from fiction. They know they’re lied to and are cynical about the government and their news media, but they’re still affected by the propaganda inundating them.

Before concluding that this doesn’t happen here, keep in mind how many Americans believe claims that Barack Obama is a foreign-born Muslim socialist who wants to subject sick people to death panels.

People kept telling me, “You ought to write a book.” (Maybe they wanted to shut me up.) I resisted. Plenty of people, more knowledgeable than me, have written excellent books about China.

Yet some of those books promote a view about China that even a brief sojourn like mine would call into question. One of the most common is that China is a powerful nation whose progress out of Third-World poverty threatens the United States. The Chinese certainly want to believe that, and its government insists this is so.

It’s the conventional wisdom. But what I saw suggests the common-sense conclusion that China will not be strong or rich enough in this century to threaten anyone except the smaller countries that share a border with her. China’s internal challenges are overwhelming, and will suck up every bit of money and effort available to keep them from swamping the country. There isn’t any of the surplus needed for international power.

China is a paper dragon, projecting an illusion of power far greater than its substance. Internationally, its allies are the rogue state of North Korea and some of the poorest countries in Africa, which can be cheaply cultivated by relatively affordable investments.

The highest priority of the Chinese government (topped by nine old men whose dictates rule 1.3 billion people) is maintaining its one-party dictatorship. Its attention, money and policies are devoted to this end, with control of its citizens as the means. All else, including international opinion, is a distant second.

Their methods, very roughly, boil down to three strategies: control information about China’s past, current conditions and the world beyond its borders; prevent citizens from organizing so much as a block club that isn’t sanctioned by authorities; and squash dissent. Transgressors suffer punishments ranging from loss of jobs, harassment and house arrest to beatings, imprisonment and execution. Their children and their children’s children are marked as unreliable and kept out of good schools and skilled jobs. For generations, they’ll suffer from a big, black mark made in their permanent political files.

Here in the U.S., kids snigger over threats made by exasperated teachers that misdeeds will be noted on their “permanent record.” In China, there really are such documents, compiled for every Chinese citizen which none is allowed to see.

Even with a cushy job like I had, its greatest benefit came to be the comforting knowledge that I had a guaranteed exit from China.

One thought on “I was a Commie wage slave”