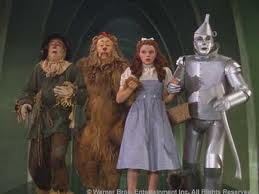 Margaret Heffernan, an author and former producer for BBC, has an explanation for why politics and even social relations in the United States have become so strained, partisan, divisive and nasty.

It’s not because those on the other side of the spectrum from us lack brains, a heart or courage. The problem is that we only pay attention to the wizards who tell us what we want to hear.

In her latest book, “Willful Blindness,” Heffernan describes why we do this and the unfortunate effects of the phenomenon. Basically, we seek personal validation by screening out viewpoints we don’t agree with because they make us uncomfortable. The results include an ever-narrower perspective that becomes more extreme with every avoidance of alternative opinions.

She also describes how people’s opinions tend to move away from the edges of the spectrum and towards middle ground when they do allow themselves exposure to different ways of thinking.

With this in mind, President Obama’s attempts to seek grounds for compromise with his political opponents appears to be less a betrayal of principles and more a mature acknowledgement that nobody has a monopoly on truth or answers.

So in the spirit of a broad-minded search for solutions and a dispassionate analysis of facts, I have added conservative websites and publications to Bad-Influence’s media listings. One of them, World Net Daily, caused me an embarrassing Homer Simpson moment when I checked its media-listings page. It includes The Nation, Mother Jones, Progressive Review and the Village Voice, along with conservative stalwarts like The American Partisan, RushLimbaugh.com and Reason Magazine.

A leading conservative website with a broader offering of news sources than Bad-Influence? Doh!

Although Bad-Influence intends to be a resource for progressive activists, Heffernan’s writing has convinced me that nobody will get much of anything done until we pay more attention to opinions we don’t like. So I’m going to start looking at those conservative sites to crack my mind open a bit. Not so much that my brains fall out, but enough to recognize that there may be more than one path through the woods that will lead to home.

One thought on “Challenge yourself”